Following my adventures in Italy with my fellow Football Blether writers, it was back to the Scottish Juniors with an intriguing East of Scotland Conference League Match between Linlithgow Rose and Jeanfield Swifts at Prestonfield. The novelty of an 8pm kickoff on a Saturday night added to the mystique.

Despite being a Hibs fan and now living in Edinburgh, I have found myself being drawn to watch my home town junior side Linlithgow Rose (despite the fact they wear maroon!) more and more over the last few seasons. In fact, this will be my fourth outing this term watching them, following a glamour friendly V Hibs at Prestonfield, a Scottish Cup Preliminary round tie against Preston Athletic at Pennypit Park and a turgid Scottish Cup home win over Highland strugglers Fort William.

My enjoyment of following Linlithgow Rose stems from the perfect storm of factors. I found Hibs match tickets to be overpriced considering they were in the process of dropping to the Championship and the football on show (at that time under Fenlon then Butcher) was god awful. In the Championship, Hibs still had one of the most expensive season tickets in the country. Linlithgow Rose offer a cheaper alternative with tickets usually being under £10.00 with this League game being the princely sun of £6.00 and the standard of football is usually good and the games enjoyable. Further up the footballing pyramid, you feel as if the clubs try and squeeze the fans for every penny they have which is not the case, in my experience, with the Juniors and Lower League.

I find the Junior game a lot more authentic due to the strong connection between the team and the fans which I think is down to a lot of the players having either grown up locally or living and working in the area. You are more likely to bump into a Rose player around town if you go about your daily business and I even went to school with a few of their players so it’s natural to want to see them do well. 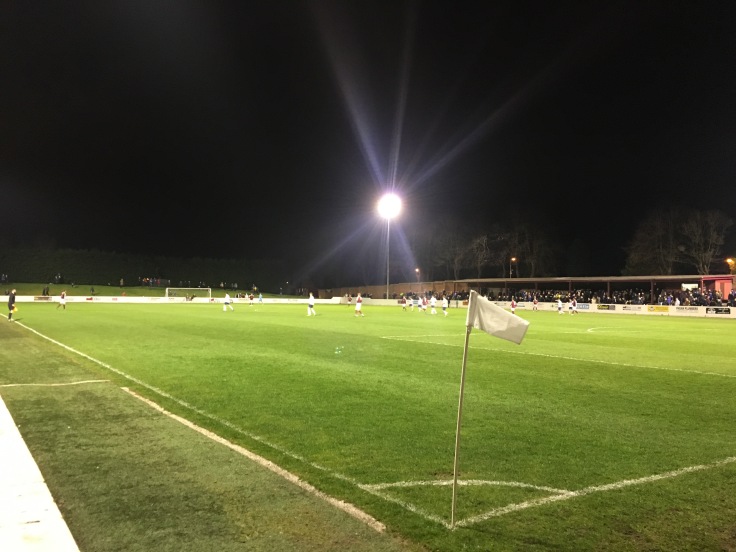 In terms of performance, The Rose had a good cup run in the 2015-2016 season where they reached the 5th round of the Scottish Cup only to be eliminated by Ross County. As cliched as it sounds, it put Linlithgow on the map and I took great pride in the town I grew up in being mentioned alongside Scottish footballs heavyweights.

Rose home games are also an excellent excuse to visit my parents and catch up. My Dad attends the games with me and more often than not we also frequent the local Linlithgow watering holes pre and post match. The pies at the game aren’t half bad either!

Linlithgow itself is best know as being birth place of Mary Queen of Scots and the former Scottish capital features the tourist hot spot Linlithgow Palace. Linlithgow is located in West Lothian and is ideally situated on the main train line between Edinburgh and Glasgow making it excellently placed for commuting. Despite being home to around 19,000 people, Linlithgow Rose attract less than 1,000 to Prestonfield which has a capacity of 3,500. It’s a shame when you are on Linlithgow High Street at midday on a Saturday and see all the various club busses heading to Parkhead, Ibrox, Tynecastle and Easter Road rather than head along to Prestonfield. I have been guilty of it myself in the past but do think more can be done to attract these fans by the club.

If you head to Linlithgow by train, you are at the opposite end of town from the stadium. Fear not though as it is a quick 15 minute walk to reach Prestonfield with there being plenty of stop off places on the way in the form of pubs and cafes which Linlithgow has an abundance of, if you wish to wet your whistle.

With regards to the game, Linlithgow Rose went into the match off the back of a strong league performance against Blackburn, running out 7-0 victors. The Roses talismanic striker Tommy Coyne bagged a hat trick and still found time to miss a penalty.

Jeanfield Swifts had the leagues longest unbeaten run this season, finally succumbing to defeat on February 16th to current league leaders Broxburn in a 3-2 thriller. A further defeat to St Andrews all but killed off any title hopes. This doesn’t detract from the fact that The Swifts have had an excellent season, especially as it is their first season in the seniors. Their unbeaten run and several victories over Lowland League opposition points to a potential title tilt next season if they recruit wisely.

A bumper crowd of 530 packed into Prestonfied for this ‪8pm‬ kickoff. The crowd swelled by the Ground Hopping contingent. An interesting concept with the East of Scotland League shifting kickoff times so this group could watch four games in a day with the first being Camelon Juniors v Edinburgh United kicking off ‪at 11am‬. Incredible stamina on show by the die hard Hoppers!

The game burst into life in the 7th minute with The Swifts taking a deserved lead albeit in controversial fashion. Rhys Davies who converted appeared to be in an offside position in the six yard box when the final ball was played across, with a Rose player being booked for dissent with his remonstrations. In the world of Junior football, you as a fan can hear every word!

The Rose equalised when Roddy MacLennan broke through in the 15th minute and tucked the ball neatly past the onrushing Swifts keeper. A good, well taken goal but the Rose had been toiling up to this point so it was a tad harsh on the visitors.

Things then went from bad to worse for the Swifts as that man again, Roddy MacLennan put Linlithgow in front in the 39th minute with a similar goal to his first to ensure the Rose went in with a hard fought lead at half time.

Half time flew by flicking through the match day programme. Due to the incoming Groundhoppers, a Linlithgow Rose programme was made for the game, featuring Owen Ronald on the cover. Most of half time was spent puzzling over the Groundhopping themed quiz which worked the old grey matter!

The second half started much like the first. Jeanfield Swifts started well and promptly equalised with Connor McLaren in the 46th minute. Perhaps the Rose backline were also preoccupied with the quiz!

The game was finely poised, The Swifts peppering the Rose goal from distance on a number of occasion whilst the Rose couldn’t make the most of several corners and free kicks in dangerous positions.

The game was decided in the 65th minute after a foul from the Swifts goalkeeper. Up stepped Tommy Coyne, Linlithgow’s top scorer this season with 42 goals, who smashed it home to send the home fans home happy with their 3-2 win. The win also kept Linlithgow’s title hopes alive. The Groundhoppers were also pleased as a cursory look on Twitter seemed to point at this match being their game of the day.

Overall, it was an absorbing game with plenty of goals,chances and action, not to mention the friendly welcoming atmosphere. This is my experience at the majority of Junior and lower league games which makes them great value for money and a good day out.