We embarked on something of a pilgrimage to the city of Parma on Saturday 9 March 2019. Parma is a city famous for food and of course, 1990’s football with legendary players like Asprilla, Crespo and Thuram to name but a few who graced the Stadio Ennio Tardini during the peak glory years of this relatively small club (see previous article covering Parma here).

After the boom and eventual bust of Parma, followed by seasons spent playing in the lower leagues of Italian football and of course the subsequent consecutive promotions back to Serie A, this is a club which garners no shortage of intrigue and romance from overseas fans. Us included.

Following budget flights from different European starting posts, we convened in Milan the night before the Parma match. Catch up beers, catch up Aperol Spritz and sampling of local pizza followed as well as what could be described as the battle of the midfield maestro cocktails – with the “John Collins” taking a surprise victory over the “Pirlo”.

The next morning, we made our way to Milano Centrale station, a huge imposing building from where we were catching a morning train to Parma – pre booked tickets working out at around €9 each for the comfy train journey which took just over an hour to travel through the northern Italian countryside to our destination.

Alighting in Parma we found ourselves in a tidy and picturesque little city. A quick visit to the Cattedrale with its epic painted ceilings before an absolutely mind blowing lunch, worthy of the reputation of the city as a culinary hub, down one of the many back streets and alleys. Top preparation for the upcoming match that evening.

We made our way through the centre of the city towards the Tardini in the south east of the central area, past further restaurants and bars and through tight residential streets with a number of old school Vespa scooters parked throughout. Our initial destination was the Parma Supporters hub just outside the stadium perimeter, which we entered after picking up souvenir scarves from a stall opposite.

In the lead up to the game, we had been in touch with Giorgio from “Parma Fans Worldwide” in order to get the low down on attending a Parma match but also to seek some guidance on buying tickets and getting the full Parma experience while there. If truth be told, the help and assistance we received was absolutely exceptional.

Not only were tickets arranged for us through the club – to be collected and paid for on the day, but we were also made to feel extremely welcome by Giorgio himself, an incredibly nice man who was really keen to make sure that we, and many others, were able to attend and enjoy Parma games. While greeting us within the little supporters hub, its walls adorned by photos of Parma sides and players from yesteryear and with replica trophies sitting on plinths also, neatly illustrating exactly why Parma have the reputation they do from the 90’s.

The most impressive piece of memorabilia however, was a door hung within the building. Without being pointed out, this didn’t seem to be anything noteworthy, but upon inspection the door was covered in the signatures of a whole host of former Parma players – the door itself it transpires was once part of the home dressing room at the Tardini. A brilliant little feature that one might usually miss. 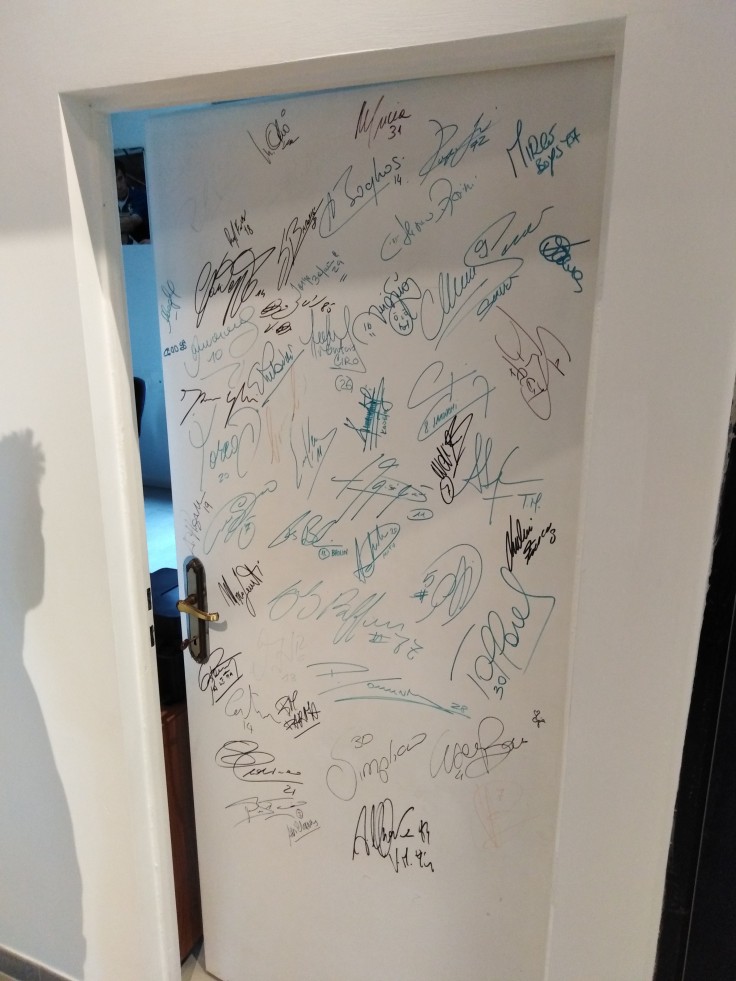 After around an hour chatting about Parma, Parma supporters, the philosophy of the Parma Supporters Worldwide club, being introduced to a 92 year old Parma fan and also being invited out for pizza and beers post match, we made our way into the stadium.

Past the usual security checks and friskings, we entered the stands of the famous Tardini. After collecting a couple of beers, we climbed the steep concrete steps up towards the top of the open yellow bowl.

A sizeable crowd filled the stadium, with the Parma Ultras in the Curva Nord making a lot of noise. It really was an impressive sight, as flags and scarves were waves and swung above heads alongside the choreographed singing and chanting. What was also both brilliant and frightening at the same time was the fact that despite being made of concrete, the Tardini literally bounced up an down in time with the Ultras.

As the match kicked off, Parma with their white tops and black shorts made some of the early headway against the red and blue shirts of Genoa. The first half came and went with both sides cancelling each other out to a large extent. Bruno Alves at the back for Parma kept things solid, while Gervinho offered some threat going forward, even with his tendency to dribble into blind alleys. Roberto Inglese (Bobby English) up top made a nuisance of himself and offered no shortage of effort, albeit with limited end results. A half of few chances ended with the score locked at 0-0.

The second half offered much of the same, with a few half chances for both sides. Genoa passed up a couple of good openings before Parma were able to win a corner on their left. This was swung in and after a goal mouth scramble, Kucka drive the ball high into the net to make it 1-0.

After the delirium in the stands following the goal, a sense of nervousness engulfed the arena. Parma were holding on and with a few changes – most notably the introduction of Pandev – Genoa started to come more into the game in search of an equaliser. Things were getting tense in the stands, with a few edgy Parma fans unable to hide the nerves. One moment which encapsulated the emotional roller coaster, was when Parma broke up the field after a Genoa attack, only for Gervinho to blaze a shot over the bar after rounding the keeper and with teammates screaming for a square ball. One Parma fan in front of us went from awaiting the bulging of the net to collapsing down and burying his face in his seat, a broken man. As if to add to the stress, Genoa then won a free kick on the edge of the box – more trauma for the fan in front of us, who sat hunched on his seat, hands covering mouth – the nerves palpable. He looked as if he had been here before, expecting the win to be snatched away from his beloved side. However, the free kick came to nothing and a sense of relief swept through the Tardini as the full time whistle blew.

A hard earned win for Parma, but the match was only part of the story of this football expedition. The welcome we received as well as the assistance and integration into the Parma family we got from Giorgio and Parma Fans Worldwide was truly exceptional. Not only did they illustrate their passion for football and passion for football fandom but the approach to ensuring that complete strangers were shown the best possible fan experience was above and beyond the call of duty, truly brilliant.

With that kind of welcome, the great atmosphere and of course the city of Parma itself – this is a trip I am keen to make again.