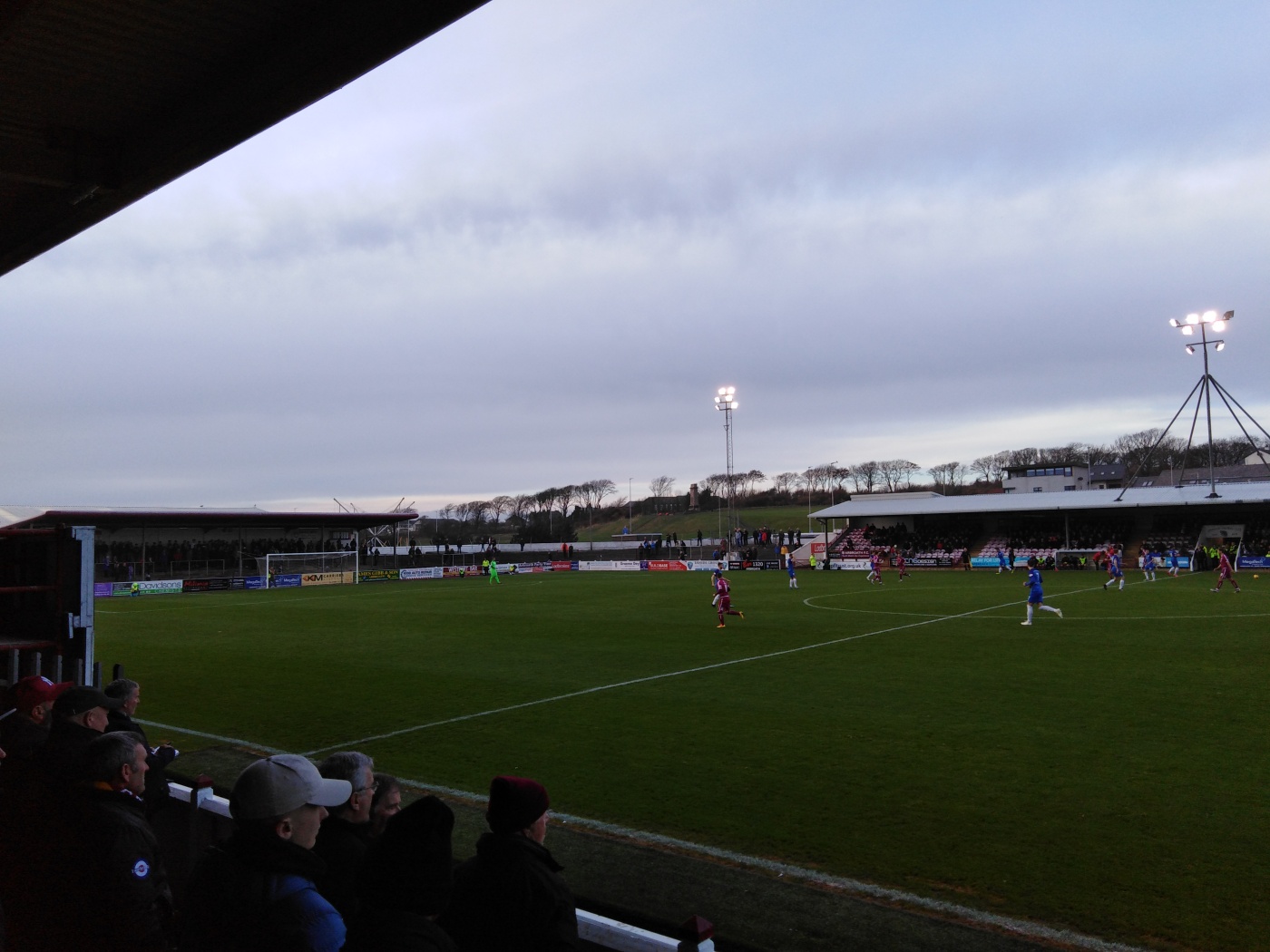 Saturday 10th November and we embarked on a trip to the seaside town of Arbroath on Scotland’s North Sea coast for a match up between the home side, unbeaten this season, and their local rivals Montrose in a tasty Angus derby.

Arbroath is located north of Dundee travelling up the east coast, it is well served by the main UK train lines with the London to Aberdeen service passing through and stopping here in both directions as well as added services from both Edinburgh and Glasgow to Aberdeen and back again, effectively meaning trains are roughly every half hour towards the north and south.

Travelling to the game as a group from both north and south, we met in one of many cosy watering holes located near to the station, before wandering down towards the town centre to pick up some lunch. As above, there are a number of pubs strung along the main road towards the centre and leading on to the harbour area of the town as well as a variety of independent shops, offices and services which increase in frequency as the streets themselves increase in vibrancy and vitality as you reach the centre. We found ourselves a nice little hotel restaurant for some pre match lunch, allowing ourselves an opportunity for the wonderful pre match mix of warmth, football chat, food and Belhaven Best.

After lunch we walked the short distance from the centre to the shorefront and harbour area, a couple more beers in a nice pub and a walk southwards along the shore followed, past the fantastic array of small boats and ships in the harbour/marina area and the plentiful fishmongers and chip shops along the road.

Gayfield Park came into view just beyond the harbour area. A tidy little ground set right on the shoreline – more on that shortly – surrounded by an exterior wall with entrance turnstiles. with main seated stand plus 3 terraced shelters surrounding each side of the pitch.

We paid our £15 entry at the exterior turnstiles, this represents the “going rate” for football at this level in Scotland and is probably set about where you would expect – with Premiership games for around £25, Championship for £15-20 and lower leagues for around £10. While set at an acceptable price, this does probably still represent the top rung of what I would consider paying for football at this level – particularly given wider experience of football elsewhere in the world, where prices are set lower than this (examples like Sparta Prague or Bohemians) but as above, there aren’t many complaints given the Scottish football economy in this case.

Into the ground and we headed for the supporters bar located in the Main Stand, a cosy little function room furnished with tables, chairs and a big TV. Bar prices ranged from £2-3 for a pint, which represents great value given the location inside the stadium.

After our pre match pints, we headed out to the terracing – via the food kiosk to pick up a cup of tea and a tasty steak and black pudding pie – and wandered round to the opposite side to stand within the terraced shelter on the shorefront. This proved to be a good plan – as the sun went down, the temperature dropped and the wind speed increased, which in turn appeared to blow large volumes of ice cold north sea water in from the east. So the shelter was really a necessary and welcome facility given the elements.

Kick off approached and team lines were studied, a few names popped out – Gavin Swankie in the middle of the park for Arbroath and Sean Dillon at centre half for Montrose representing 2 of the more well known players in these teams. 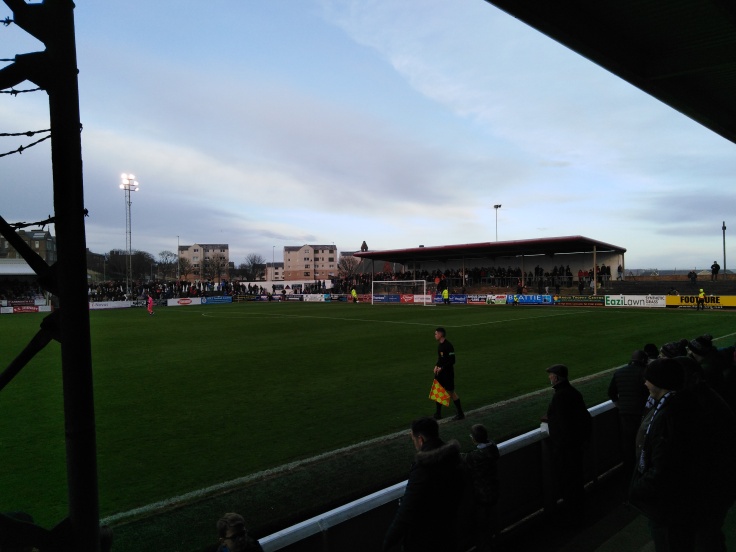 Both teams lined up in fairly orthodox 4-4-2 formations, allowing for some variation and movement. Arbroath pushed wingers Linn and Denholm high while Swankie floated around the middle as an old school number 10. As above, Arbroath started the game unbeaten and top of the league, Montrose meanwhile started in mid table after a reasonably solid start to the season.

Arbroath had the early territory, using their wingers to good effect and pressing Montrose back. It was however the visitors who mustered the first real chance with a quick breakaway up the right hand side leading to a square ball across the box, the Arbroath ‘keeper Jamieson came and missed the ball leaving the Montrose striker Henderson free at the back post. The surprise of the ball reaching him however seemed to effect the striker who could only bundle the ball wide.

The match continued to ebb and flow thereafter, with Arbroath making most of the running and attacking moves. The football was good, full backs and central midfielders routinely looking to play in the wide men, with the striker Wallace linking well with his teammates – if being prone to the odd tantrum if they failed to feed him the ball back.

The wingers Linn and Denholm had started o the left and right respectively, however after around 25 minutes they switched. This switch bore fruit quickly as Denholm picked up the ball in the inside left channel of the penalty box. He twisted, inside and then back out beating his man and then drilling home left footed across the goalkeeper and finding the bottom corner.

After the goal, the game continued in a similar fashion, with Arbroath looking relatively comfortable and trying to work openings where they could. Centre backs Little and O’Brien looked particularly impressive in handling the Montrose front line, winning all the high balls sent forward by both Montrose and the wind, as well as tidying up what came through on the ground and using the ball well thereafter. The half finished Arbroath 1-0 Montrose.

Into the second half and the first 5 or 10 minutes went the same way as much of the first half, with Arbroath doing most of the pressing. A tactical switch from Montrose however after 55 minutes, bringing Bolochoweckyj on as an extra centre back and switching to a 3-5-2 formation changed the character of the game completely. With an extra man in the middle of the park, Montrose now started to dominate the ball. They used this additional possession to good effect, working their way through the Arbroath rearguard on a number of occasions to win a few corners and create a number of openings. The Arbroath defence remained strong however.

There was a moment of excitement where the Montrose striker Rennie was sent through in the inside left channel, he was being chased by an Arbroath defender and just seemed to wilt and flop to the floor, a moment of concern for Arbroath – quickly remedied by the referee who saw fit to book the striker for a dive, with limited protest from the away side.

As the sky darkened and the temperature dropped and as the sea blew across the pitch, the football seemed to adopt or mimic the weather and became more rough and bracing. As Arbroath sought to try and kill things off and Montrose tried to create further openings, the challenges and tackles grew harder, more robust and full blooded. Substitutions came and went, which worked in the favour of Arbroath who were able to regain a foothold in the match and start putting pressure back on Montrose.

This territory eventually told, as the ball was worked to the right and a shot was taken. Montrose ‘keeper Millar could only shovel the ball to the side where Arbroath substitute Doris showed some neat footwork before tapping the ball past the goalkeeper. As the ball trundled over the line, the Arbroath fans in the Harbour End terrace went crazy and en masse rushed down towards the pitch to celebrate with the pile of players, tired but jubilant, in front of them.

The final 5 minutes was played out with a few more meaty challenges, some of which the referee decided to let go. The Arbroath fans were in full voice, singing and chanting in support of their team but also slagging off their Montrose counterparts. Even from our neutral standpoint, these songs and the “pile on” at the goal did crack smiles across our faces and demonstrated the passion which so many of these smaller clubs rely on and really does represent a core element of football fandom – all the millions of TV revenue can’t really compete with the passion and joy created by a scrappy goal in a local derby followed by a huge rush, pile on and everyone going bonkers in the terracing. Wonderful.

After the second goal, the game began to slow down for the remaining minutes. The final whistle then blew just as the temperature and wind had increased to an uncomfortable level, full time Arbroath 2-0 Montrose.

All in, this was a great experience. Arbroath showed clearly why they are unbeaten and sit top of the League, while Montrose showed that this is a competitive league and indeed caused the home side a number of problems throughout. The football was at a good standard, some of the rough and ready elements that you would expect, but also some good passing and certainly most players seemed comfortable on the ball. Value in terms of the day out as a whole was high, with pricing for admission, food, tea, beers and then the atmosphere and spectacle on top representing a good deal. Thoroughly enjoyed and would recommend.