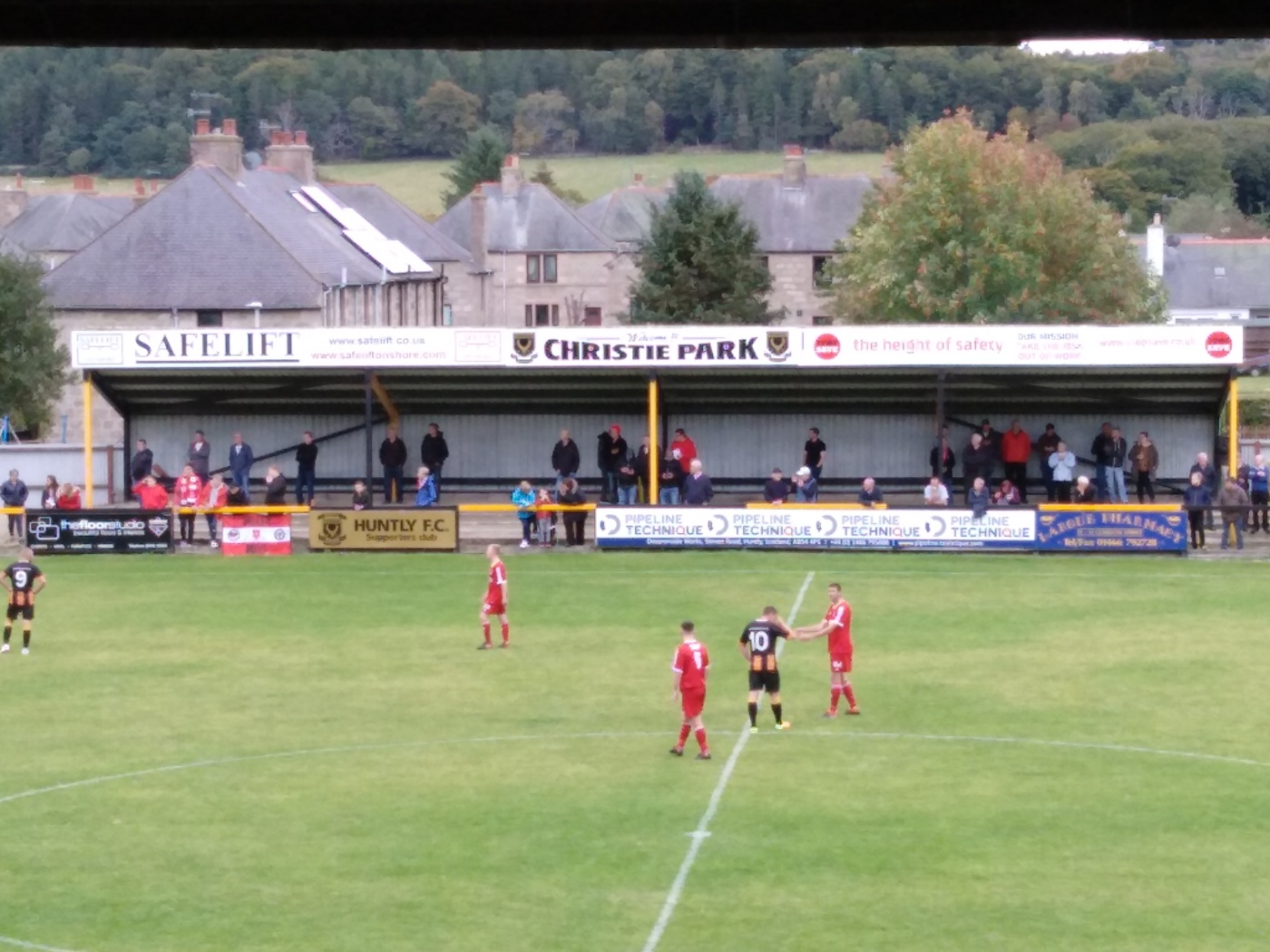 Located approximately 40 miles north east of the city of Aberdeen, just off the A96 road linking Aberdeen to Inverness is the town of Huntly. Tucked into a picture postcard landscape characterised by rolling uplands and hills with farmsteads and wind farms pepper potted around the surroundings.

Christie Park is home to Huntly FC, who were at home to Deveronvale of Banff in a mid table Highland League clash. The ground is located just to the north of the town centre, a 5 minute walk from the town’s central square and with ample on street and designated car parking opportunities nearby. There is also a railway station serving the town, albeit with the infrequency of the Scotrail services, this isn’t the easiest mode of travel.

A Championship flag highlighting past glories flutters in the wind at the southern end of the ground which also accommodates a main seated stand with dugouts, a covered terrace opposite and open terracing round the rest of the pitch. A toilet block and food/drink kiosk complete the facilities within, with access to the Social Club and hospitality area also possible.

Entry to the ground cost £8 with a further £1 fee for a seat in the stand. Friendly staff, with the obligatory half time draw tickets being sold just within the turnstiles add to a community, welcoming feel to the club. After purchasing cups of tea and generously filled macaroni pies (exceptional) we found a space along the terracing to settle in for kick off.

Huntly lined up in a 4-2-3-1 formation, it was clear from early stages that this formation was designed to maximise the speed of their right winger Reece McKeown and the skill of Gary McGowan on the left, with the impressive Cameron Booth pulling strings and acting as a “pivot” style sitting central midfielder. Against them, Deveronvale lined up with a 3-5-2 which switched to a 3-4-3 and sought to ensure solidity and to try and exert a degree of midfield dominance within the game.

The first half was dominated by Huntly, who made most of the play within Deveronvale’s half. Lots of the ball and endeavour however didn’t translate into too many clear cut chances. Huntly were able to find their way up the wide areas, with Deveronvale’s wing backs being pulled back to cover the advanced wingers within the Huntly side. A theme of the first half however was Huntly failing to make the most of a few half chances created, with the final ball or finish often slightly mis-hit or the bounce of the ball being such that a clear shot on goal wasn’t achievable. Deveronvale struggled to create too much, with a few forays forward through wide positions and a couple of dangerous in-swinging corners which caused a degree of confusion, but nothing more, within the penalty area being the fruit of these labours.

As above, Huntly used the speed of McKeown on the right to cause trouble, constantly looking to race past defenders as well as utilising the skilful McGowan on the left to cut inside, dip his shoulder and create pockets of space. McGowan however had one of the more excitable moments of the first period as a loose elbow made contact with a Deveronvale defender, for which he was booked, before making a further robust challenge shortly after which the referee let slide notwithstanding protestations from opposition players. Just as the game threatened to kick off, the referee blew for half time.

Into the second half and Huntly had started brightly. Their first real attack bore fruit as well, with a move down the left eventually leading to a cut back just as it looked as if Deveronvale had got enough bodies back to snuff out the danger and Kai Ross swept home from just inside the box to give the home team a 1-0 advantage.

Thereafter a bit of a tactical battle ensued with Deveronvale pushing on to make a 3-4-3 formation, aiming to put pressure on the Huntly back 4 and try to pin the Huntly midfield back. This approach almost led to a quick equaliser as substitute Robert Allan made headway down the left to cut back, which Huntly did well to scramble clear amidst a moment of panic. In order to counter this tactical change from Deveronvale, Huntly altered their own formation to settle on an advanced 4-2-4 in order to pose the back 3 of Deveronvale problems and aim to create more space for their aforementioned wingers. This led to a very interesting period of play in the second half as the game really opened up and both sides took turns, in an end to end basketball type fashion, of trying to attack the opposition backline with their advanced attackers.

Deveronvale managed to create a few half chances, with some corner kicks and crosses into the box leading to confusion and panic within the Huntly box. Huntly keeper Storrier made a few great saves low down to his right as the pressure upon Huntly’s slender and ever more vulnerable looking 1-0 lead intensified. A promising cut back was blazed over late on as Deveronvale looked to be running out of time. Huntly centre half Clark stepped up to calm his defensive colleagues and went through a staggering 5 minute spell where he roamed about winning every ball that came near is penalty area, the captain leading by example to drag his team through.

Into the very last minute and Huntly managed to break, exploiting the space afforded by their advanced wingers in the 4-2-4 to break up the right. The ball was crossed to McGowan over on the left, who took a touch on the bounce around 20 yards out and struck a sweet, swerving volley with the outside of his right foot which gave the keeper no chance as it sailed into the postage stamp top corner. A great goal, which sealed the points for the team in black and gold.

Overall, this was another great Highland League experience. The football was a very decent standard, which added to the value of the £8 entry. A friendly atmosphere, with club patrons being more than welcoming and friendly to everyone in attendance. A special shout out must also be made to the group of well dressed guys in the hospitality section who sang and chanted throughout, not all of this was in the best taste with a mix of funny and cringe-worthy song choices but it added to the atmosphere and experience of the day out nonetheless.

A great day out, well worth another visit and somewhere I am keen to watch more football – and eat more exceptional macaroni pies – in the future. Highly recommended football expedition!!